portfolio
who we are
news & events

GET IN TOUCH WITH US
Home
Program

Portfolio
Who We Are
News & Events

get in touch with us

5 Female Founded Startups To Look Out For In Accelerating Asia 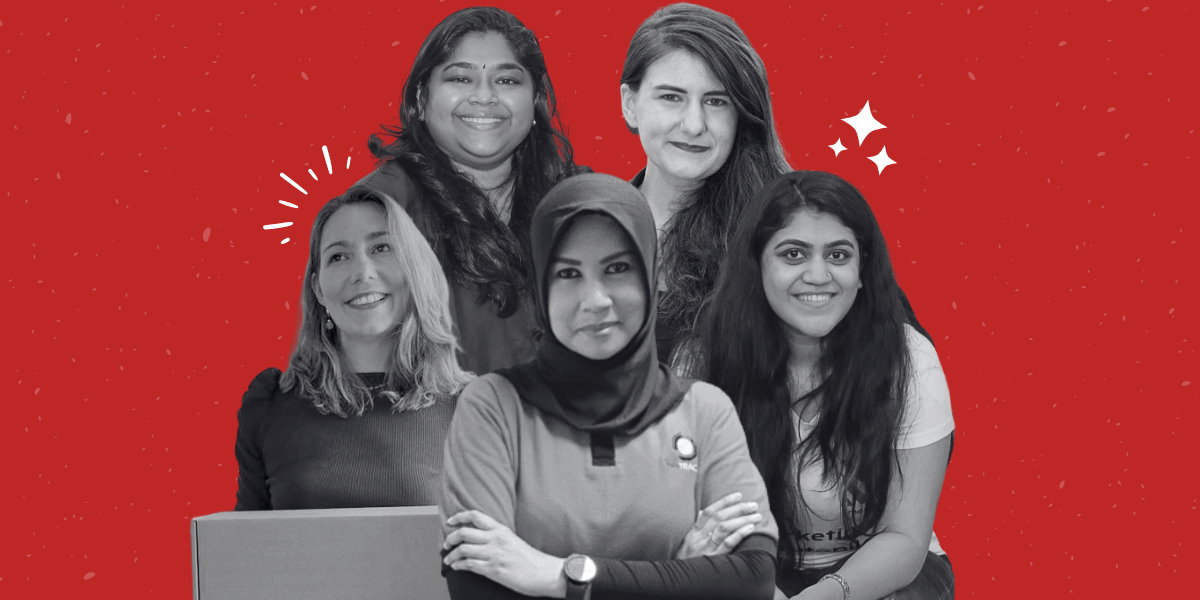 Women are taking the stage in startups. With the recent pandemic, studies have shown that women have a higher unemployment rate than men. This period of job scarcity opened the doors to self-employment. This included a 43% jump in the founding rate between 2019 and 2020, according to the World Economic Forum.

Despite the increase in figures, Crunchbase reports a significant decline in venture capital investment for women-led firms, which plummeted to 2.3%. Accelerating Asia concentrates on gender lens investing, with a 35% share of female founders in our portfolio.

Why is it important to focus on female entrepreneurs?

The term gender lens investing which was first used in 2009, demonstrates that making investments in gender parity will benefit people, companies, and nations as well as the economy as a whole. This benefit of gender diversity in leadership resolves gender-based inequities and harassment in the workplace, gives different views and viewpoints a chance to be heard, and boosts the confidence of active female investors.

According to a BCG study, women make up 32% of the tech workforce in Southeast Asia, which is higher than the global average of 28%.

We’ll be looking at some of Accelerating Asia’s portfolios founded by women:

Anggia Meisesari, Founder of TransTRACK.id, showcased her years of experience in telematics and found a way to solve late deliveries, theft, and inefficient costs of contractors and their operation vehicles through a GPS tracking system dedicated to drivers. TransTRACK.id builds integrated solutions for fleet management, supporting managers across the country to improve productivity and utilization, helping them reduce costs and improve margins.

TransTRACK.id raised SGD 750k seed financing round led by Singapore-based early-stage venture capital firm Cocoon Capital. The round was also joined by the Indonesian Women Empowerment Fund (IWEF). In a span of 3 years in their operations, the company has seen a 247% monthly revenue increase and has raised a total fund of $900,000 since March of 2022.

relay.club is an influencer management platform for innovative brands to easily find the most suitable partner and manage an effective influencer marketing campaign. Sophia Pederson, Co-Founder of relay.club, aims to be the best cross-border influencer marketing platform from China to North America, Europe, and soon globally. During the program with Accelerating Asia, they doubled their enterprise customers in China and India and raised investment from the network.

relay.club announced that they had raised funding from Epic Angels, a network of female executives and operators who have built and expanded companies in all parts of the world.

They’re on track to become the largest female-only angel network in Asia.

Tasfia Tasbin, CEO of Markopolo.ai came up with the idea of helping small businesses when she was a freelance marketer. Her clientele increased dramatically when COVID struck, and she was unable to serve everyone. Tasfia understood the struggle of small business owners trying to boost their online visibility. That's when they recognized the issue they were solving was a global one, and so the startup was formed. Markopolo.ai is an advertising tool that enables you to run targeted Google and Facebook ads in seconds without any prior knowledge. So people can save hundreds of hours studying Google Ads or Facebook Ads or spend a lot of money hiring an expensive agency.

Their total funds reached up to $400,000. Markopolo.ai has a high margin and outstanding unit economics, making it appealing to investors in the current macro dynamics.

Markopolo.ai was awarded as the winner of the She Loves Tech Bangladesh 2021 Bangladesh Round and has been nominated to compete against all regional champions for the global round of the competition.

The goal of 60Plus India, an end-to-end parent management technology platform, is to make it simple for senior citizens residing in India with relatives abroad to take care of their medical, personal, and emotional needs. Arasi Arul, the creator of 60PlusIndia and a serial entrepreneur and named as the Tamil Youth Icon of 2012, developed the app to solve the struggles of this potential market with India having the second-highest population of immigrants in the world and its 131 million senior citizens. 60PlusIndia’s has also increased their monthly revenue to 30%.

Gwen Delhumeau, Founder of Ellegra, understands women’s struggles when it comes to finding clothes that fit their style, body shape, and budget. Ellegra is an eCommerce platform designed to give you a highly personalized shopping experience. With each order comes personalized styling cards to give you the confidence you need to slay your new outfits.

Since they started, Ellegra is growing 40% month on month, with an average order of 3 boxes by their customers. They have raised over $225,000 funds since then.

Accelerating Asia continues to expand our portfolio of female-led ventures.

Interested in investing in our portfolio? Request a startup introduction.

Want to invest alongside us in female founders? Learn about investing in our VC fund.

Invest in the future

INVEST IN OUR FUND

In making an investment decision, investors must rely on their own examination of startups and the terms of the investment including the merits and risks involved. Prospective investors should not construe this content as legal, tax, investment, financial or accounting advice.